Fresh from a nationwide tour, Christopher Green’s wonderful Ida Barr presents another unforgettable Mash Up as part of Open East Festival; a festival of arts and music at the Olympic Park.

Ida Barr is the hilarious old time Music Hall turned Rap Superstar character of award-winning artist Christopher Green. During the weekend she lead a crowd of people of all ages in a giant sing-a-long – Ida Barr’s Mash Up – where classic old time music hall songs are fused with contemporary pop songs, in a joyful style of music that Ida calls ‘Artificial Hip Hop’!

Participants included groups from Prior Western School, Arcola Theatre and the Claremont Project

There were performances from the Vision Choir, made up of Olympic Volunteers, and the SOH! dancers based at Hoxton Hall who performed some of their signature dance moves. 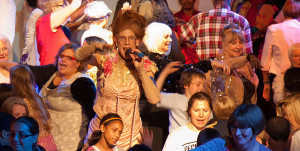